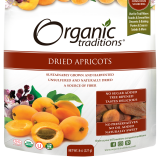 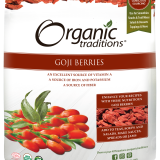 Goji berries, also known as wolfberries, are one of the most prized superfruits in the Asian tradition. In traditional Asian Herbal medicine, Goji berries have been used to promote vitality and well being. Chinas legendary first emperor attributed his long life to this precious berry. For this reason it is commonly referred to as The Longevity Berry. Goji berries are a source of Vitamin A, Vitamin C and Iron. They also contain essential amino acids, trace minerals and Vitamins B1, B2, B6, Vitamin E, carotenoids and a host of antioxidants, giving them an ORAC value of 7,600 per ? cup, 30 gram serving. The ORAC value is a measurement of the antioxidant capacity of different foods. In traditional Asian culinary preparations Goji berries are added to teas, soups, salads, stews, as well as vegetable dishes.